These websites use cookies to ensure better user experience and functionality. You can find out more about cookies here. I agree

Located on the edge of a mountain reef above the islands and the sea,
with a spectacular 360 degree panorama!

Hotel Draga di Lovrana is an experience to remember...
Book now
EMPEROR FRANZ JOSEPH'S EXCURSION SITE
The hotel dates from 1908 and was built by entrepreneur, Anton Urm from Vienna. 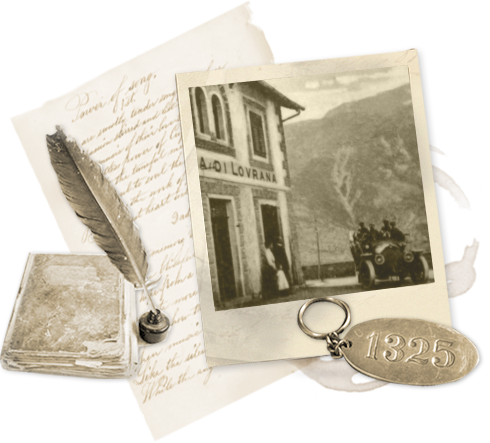 The hotel dates from 1908 and was built by entrepreneur, Anton Urm from Vienna. Many Austrian-Hungarian, aristocratic guests visited the hotel, one among them was Emperor Franz Josef . It was a place of parties, laughter, fine wines and cuisine.
Sadly, in 1923, historic and personal circumstances caused Urm to set fire to the hotel. Some say it was because his wife died, others comment that he hoped to get insurance money, however, he did not succeed. Decades followed and the ruinous building changed owners and encouraged mysterious stories.

Nearly 80 years later today's owners, Sanja & Christian Nikolac, decided to clean up the ghosts from the past and rebuild the hotel with a lot of attention to its original design. In December 2005 the hotel reopened under the original name Draga di Lovrana and the story continues...
Website developmentdimedia.hr